This report discusses findings that stem from 22 out of 33 case studies that have been conducted within RELOCAL. They provide a rich variety of contextual and content-based insights into specifically local and regional governance practices and thus a broad empirically informed base to identify and interpret generic types of procedural (in)justice.

Methodologically, the case studies were conducted in a comparative manner and the various key research objectives were specified and organized as dimensions, analytical categories and finally a number of guiding questions. In this report, specific attention has been directed towards the role of actors, forms of leadership and coordination, the extent to which participation and the exertion of influence is safeguarded, and to what extent transparency as well as the intelligibility of the action under consideration exists.

The report is structured as follows. At first, the main conceptual underpinnings for the study of procedural (in)justice within the RELOCAL project are synthetized in a condensed form from a local/territorial governance perspective. After that, some methodological notes are given in regard to the selection of case studies and the identification and discussion of types of procedural (in)justice in this report. This is followed by a presentation of the derived types in five categories: positioning of leading actor(s) in relation to the action under consideration, forms of leadership of identified leading actor(s), forms of coordination and collaboration, participation of non-institutional actors and their exertion of influence, and, finally, transparency and intelligibility. Then, the main findings from this report are synthetized, followed by some conclusions.

A compilation of what has been discussed is illustrated in table 1, which shows not only which types of procedural (in)justice have been assigned to which case study, but also each type’s estimated influence on achieving procedural justice. Comparing case by case, it is easily recognizable which cases apparently promise to achieve it well, and which do not. 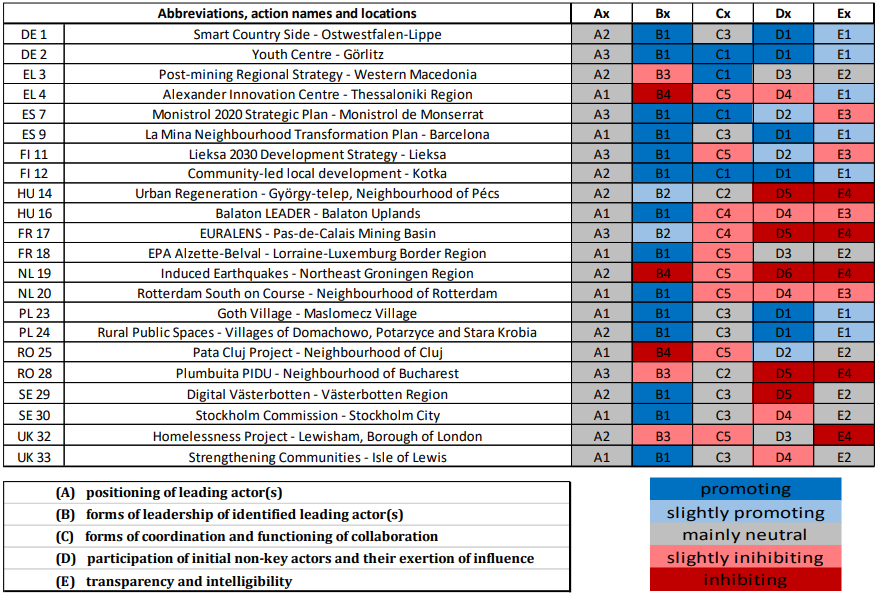 However, most of the cases indicate that they have potential for moving in both directions. In other words, there is potential for improvements, but also reasons to be aware of the need to safeguard those processes or institutional arrangements that seem to support elements of procedural justice.

To sum up, generally one can say that room for improvement can be specifically identified concerning governance practices that are related to the participation of initial non- key actors and their exertion of influence (D) and to aspects related to the transparency and intelligibility of the actions (E), whereas practices related to the leadership of the identified leading actor(s) (B) are assessed more positively. Hence, policy-makers, leading actors or other stakeholders can interpret this table as a reminder of what they eventually need to “work on”. The table also suggests that the critical study of governance practices that may contribute to procedural (in)justice should include many different elements and perspectives and these cannot be easily assessed as “good” or “bad” concerning their impact on procedural (in)justice.

This report is part of work package 3 (WP 3) of the RELOCAL project. The overall aim of WP 3 is to explore policy frameworks and coordination mechanisms that aim to promote territorial cohesion, spatial justice and solidarity across Europe. This report further explores the concept of procedural (in)justice by analyzing some of the main outcomes of the in–depth case studies within the RELOCAL project.